Please watch with sound on.

After seeing this gif, I thought it would be cool to recreate this kind of effect as a liquid simulation.

I couldn’t find the artist behind this gif, if you know its name, let me know.

I am currently learning Houdini which is a 3D software, especially good with procedural generation and simulation.

I used the non commercial version of Houdini which has some limitations (can only render with Mantra render engine, limited to 720p), but it is more than enough for this kind of personal project.

I first created a Mondrian style generator. I had this setup to control procedural generation.

I have control, among other things, on size,  on subdivision number (ie how small could be the rectangles), on how many rectangles should be colored, on color repartition. 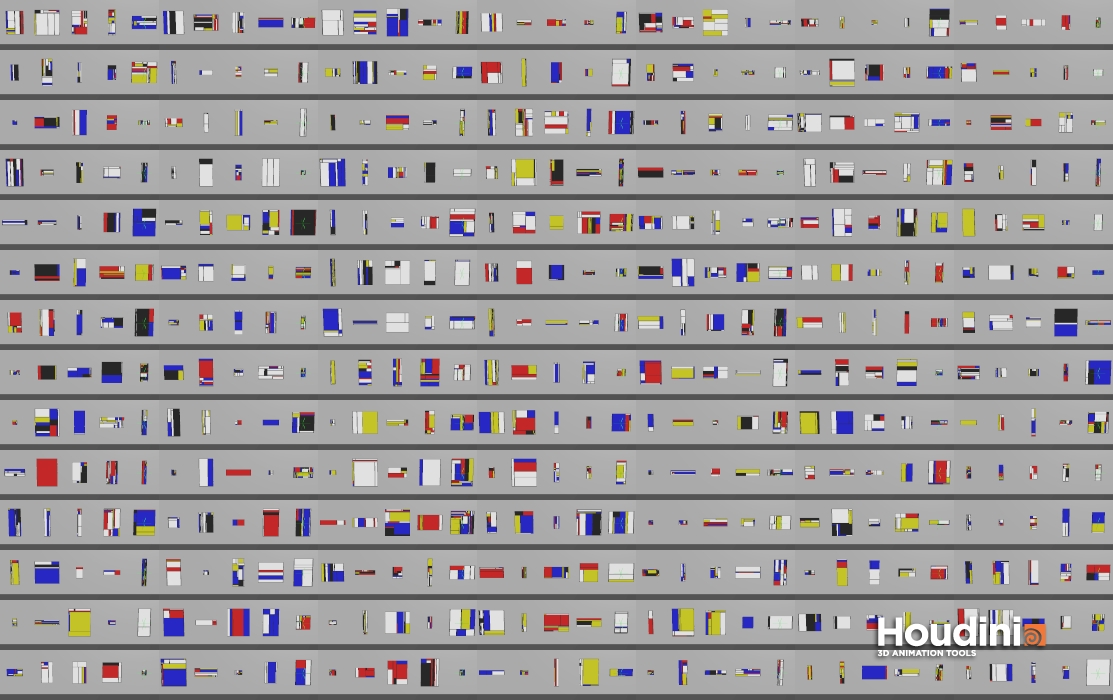 The first simulation proof of concept :

I used FLIP simulation and encountered its classic problems such as volume loss. Fine tuning some parameters in Houdini such as voxel size and particle separation made the volume loss less visible.

Houdini procedural philosophy came in handy especially for the shot necessitating a lot of different simulation. After setup, I had no more to do than to select an emitter and a collider to add a new simulation.

I had some computation power restriction (one machine, final frames took up to 30 minutes per frame) and I paid particular attention on planification to spare unnecessary computation. So editing came in the early planification stage. I first chose the music and made the sound mixing before creating the shots that will fit the sound. Like this I saved a lot of rendering time for frames that will be cut in the end.

I created a storyboard to get each effet well timed to the music.

For the “gallery” scene I had this setup to limit the number of spotlights. Later I also clipped the painting outside the camera frustrum to avoid their computations.

I used Houdini’s digital asset (HDA) to reference my paintings generation tools in several file/scenes. In the end I found out that Houdini is not the best to handle references between scenes (as you cannot share lights or cameras, as far as I as know). But Houdini was more than enough for a one person project of this scale, and I had great fun !